The lineage of the Arcimboldo family was documented by his friend, the Milanese art critic and travelogue author, Paolo Morigia. From his account, we know that Giuseppe Arcimboldo came from a noble background. His great uncle had held the position of Archbishop of Milan and, as a result of his influence, the young Giuseppe would likely have been introduced to artists, scholars and writers from a young age. His father, Biagio Arcimboldo was himself a lesser known painter (fabbrica) who worked in the Duomo (cathedral) in Milan. Although precise details of his upbringing remain scarce, it is reasonable to suggest that, through his father's influence, Giuseppe would have been introduced to painting as a young boy and that he developed his skill and talent from an early age. 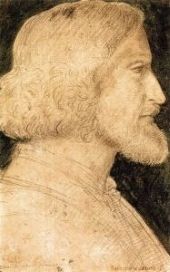 Arcimboldo trained in stained glass design and fresco painting, producing work for local cathedrals from the age of 21. His career took a decisive step forward in 1549 when he was commissioned to design stained glass windows for the Duomo. Other opportunities of note followed. In 1551, Arcimboldo painted coats of arms for the future Emperor, Ferdinand I; in 1556, he painted frescoes for the Cathedral of Monza; and, in 1558, he drew the cartoon for the Dormition of the Virgin tapestry, which remains on display in the Como Cathedral in Lombardi to this day. These eye-catching commissions, when added to the artist's remarkable nature studies, confirmed his rising reputation. Morigia, wrote: "This is a painter with a rare talent [...] having proved his worth both as an artist and as a bizarre painter, not only in his own country but also abroad, he has been given the highest praise, in that word of his fame has reached the Emperor's court in Germany." The "Emperor's court" referred to the Habsburg court in Vienna (and subsequently Prague), to which Arcimboldo was summoned in 1562 as court portraitist to Ferdinand I. Given that Milan's newly appointed archbishop was insisting on a more traditional visual language from the city's religious artists, the move to Vienna came at an opportune moment for a nonconformist like Arcimboldo. The artist had found a home and would eventually spend over 25 years in service to the Habsburgs: to Ferdinand I, his son, Maximillian II (reigned 1564-1576) and Ferdinand's grandson, Rudolf II (reigned 1576-1612). Though his most famous works challenged many of the orthodoxies of the day, Arcimboldo arrived at the Habsburg court with all the kudos of a qualified Renaissance master. However, the Habsburg court cultivated a mood of progressive thinking and Arcimboldo - who worked next to astronomers, botanists, zoologists, physicians and alchemists (otherwise known as the practitioners of "elite magic") - revelled in the creative freedoms offered by a court that saw itself as the leading center for arts and sciences in Europe. He duly blossomed as a portrait painter, and also as a decorator, a costume designer and the organizer/planner for lavishly themed balls (at which he may also have painted guests' portraits). As Morigia wrote "This noble and inspired man fashioned a great number of rare and delicate works of art which caused considerable amazement among all the illustrious noblemen who used to congregate there, and his lord and master was very pleased with him." Arcimboldo was thus paid "a good salary worthy of his merits" leading to a "fulfilling" and "honorable" life. Moreover, the culture of the court created a fertile environment in which Arcimboldo's talents could develop. He exerted considerable influence over the Emperors, both artistically and personally. He assisted, for instance, Ferdinand I in expanding his curiosity cabinets, which held various exotic species of plants, animals, objects and artworks (along with the collections of his descendants, these cabinets formed the nucleus of the Kunstkammer Vienna museum). While at Habsburg, Arcimboldo also absorbed the influence of artworks by painters including Bosch, Brueghel, Cranach, Grien, and Altdorfer.

The last Emperor for whom Arcimboldo worked was Rudolf II. This period, which lasted eleven years, is widely thought to represent the peak of his artistic career. This was due in part to Rudolf's personal interests in horticulture, botany, exotic creatures and objets d'art. In his paintings, Arcimboldo was free to draw on his observations of extraordinary animals and plants that were collected by the Emperor's agents from Europe and held in the Art and Wonder Chambers at court. He continued to produce great works even towards the very end of his life, most notably his Self-portrait as the Four Seasons (1590) and the portrait of Rudolf II as the god of metamorphosis - Vertumnus (1590-91).

Having petitioned the Emperor's permission several times, Arcimboldo finally left the Habsburg service in 1592, departing Prague for his home city of Milan. As a mark of Rudolf II's admiration for him, he was made Count Palatine in the same year and awarded 1500 Rhenish guilders for his "long, faithful and conscientious service." He died in 1593 at the age of 66, with records citing kidney stones (as opposed to the contemporary plague epidemic) as the cause.

The Legacy of Giuseppe Arcimboldo

Many of Arcimboldo's works have been sadly lost as a result of the Swedish invasion of Prague in 1648, during the Thirty Years' War. As such, the contemporary picture of his oeuvre is somewhat incomplete. Furthermore, of the works that are known, many, such as his conventional portraits and religious paintings, have been overlooked. Rather, it is the portraits made up of fruits, vegetables, plants and animals that fascinate artists and critics today. These unique Mannerist paintings have even featured in films (they are referenced in the Harry Potter films, for example), comics, novels and album covers.

In the 20th century, Arcimboldo's work underwent a revival owing to the interests of Surrealists such as Salvador Dalí, for whom Arcimboldo's composite images and allegorical allusions held immense appeal. But it was Museum of Modern Art director Alfred Barr's inclusion of his works in the 1930s exhibition Fantastic Art, Dada, Surrealism that that did most to bring Arcimboldo renewed attention from the art world. Since then, art historians have re-evaluated Arcimboldo's highly individual style, elevating him to the rank of one of the greatest of 16th century Mannerists. The 1987 exhibition "The Arcimboldo Effect: Transformations of the face from the 16th to the 20th Century" at the Palazzo Grassi, Venice, meanwhile, prompted interest in his work from psychologists and scientists concerned with optical illusions, multiple images and face recognition. In 2009 the American artist and filmmaker, Philip Haas, created four large-scale fiberglass sculptures in a three-dimensional homage to Arcimboldo's Four Seasons series. Haas stated: "Playing with Arcimboldo's imagination and reinterpreting it allowed me to make the Renaissance contemporary and make contemporary art have a root in the history of art."