The Whitney Museum of American Art

Synopsis
The Whitney Museum of American Art easily stands apart from its New York contemporaries due to its singular mission of acquiring and celebrating the works of great American artists, regardless of style. Through its annual and biennial exhibitions, the Whitney has continually maintained its reputation as a high-profile venue for relatively unknown artists to show their work alongside the works of established artists like Edward Hopper, Stuart Davis, Arshile Gorky and Alexander Calder. 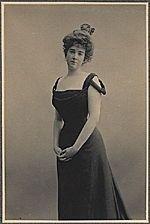 Gertrude Vanderbilt Whitney was a prominent art collector, patron and sculptor. Born in 1875 to the Vanderbilt family, whose vast fortune in the shipping and railroad industries was built in the 1800s, Whitney received much of her education from the Brearley School in New York City.

At the age of 21, Gertrude married the businessman and thoroughbred horse breeder Harry Payne Whitney, whose own family had amassed great wealth throughout the 19th century, beginning with Eli Whitney's invention of the cotton gin in 1839. Not long after marrying, Gertrude began studying the craft of sculpture at the Art Students League of New York, and in Paris with the eminent Auguste Rodin. Her love of the arts, along with her vast wealth and resources, allowed Gertude to become a major patron and collector, focusing much of her efforts in the downtown Greenwich Village scene of the early 1900s, where a new bohemia was emerging.

In 1907 the Whitneys purchased a small studio space at 19 MacDougal Alley, just north of Washington Square Park in Greenwich Village. After five years of small but impressive exhibitions by contemporary American artists, the Whitneys knocked down a wall in the studio and purchased an adjacent space at 8 West 8th Street, which became the Whitney Studio. The Whitneys continued to purchase real estate in the Village, and in 1918 they opened the Whitney Studio Club, located at 147 West 4th Street. The space was designed as a venue for young local artists to socialize, study, and to show and sell their work. The Studio Club was furnished with a reference library, billiard table and sketching studio.

The 1920s were formative years for Gertrude Whitney as an art collector. First and foremost, she was a fan of the Social Realist sub-movement known as the Ashcan School (also known as Ash Can) consisting of 8 artists who called themselves "The Eight," and included George Luks and John French Sloan. The Eight painted representational depictions of poverty in the New York City streets. In addition to Ashcan works, Whitney also amassed an impressive collection of early non-representational Modernist works by artists such as Stuart Davis and Max Weber. Edward Hopper and Reginald Marsh were two notable artists who showed at the Whitney Studio in the 1920s, and consequently owe much of their success to their association with the Whitneys.

The Museum Opens and the Whitney Biennial
In 1931 the Whitneys annexed two neighboring row houses on West 8th Street, right next to the original Studio, and renamed the larger space the Whitney Museum of American Art. This Greenwich Village location would remain the museum's home until 1954. (The New York Studio School now resides in the museum's original address.) With a core collection of some 700 artworks, many of them from Whitney's personal collection, the Whitney Museum of American Art opened its doors to the public in November 1931. Although compared to MoMA's budget the acquisition budget for the museum was a modest one, Gertrude Whitney made the most of it by collecting art only from living American artists, many of them relatively unknown. Whitney hired her former Studio Club assistant, Juliana Force, as the museum's founding director.

The following year, the museum began holding what would become the city's premier events for showcasing contemporary American art: the Whitney Annual and Biennial exhibitions. Gertrude Whitney used these events as a way for the museum to regularly acquire works from new and emerging artists, and in the process her museum purchased many soon-to-be masterpieces from the likes of Johns, Guston, Kline and Gorky. To this day, the Whitney Biennial remains a seminal event for relatively unknown artists to show their works on a large stage.

The Whitney Dissenters
As Gertrude Whitney tended to favor Realist and figurative painting, and in particular paintings by artists in "The Eight," most of the museum's original collection, as well as those newer works featured in the Annual and Biennial, were of that style. This focus on non-abstract art, as it were, incensed a small group of New York artists who in November 1938 protested the selection of artists for the Whitney Annual by staging their own exhibit called The Ten: Whitney Dissenters.

"The Ten," as they called themselves, had originally formed in 1934 and included among its members the artists Mark Rothko (at the time still known as Mark Rothkowitz), John Graham and Adolph Gottlieb. By the time of the Whitney Annual in 1938, one of The Ten, Ilya Bolotowsky, had actually been selected as one of 109 artists to appear at the Whitney. Nonetheless, his work was included in The Ten show, which was held at the Mercury Gallery on West 8th St., just two doors down from the Whitney.

According to the Mercury Galleries co-owner, Sidney Schectman, "... we rejected what was going on at the Whitney Museum on 8th Street which had exhibition after exhibition devoted to people like Brackman and Luigi Lucioni and the Blanche pair, Lucille and Arnold, and Alexander Brook. We called it silo art, paintings of barns. And we never had any shows like that at the Mercury Gallery.."

The Museum's Relationship with Arshile Gorky
Despite The Ten's claim that the Whitney favored art that tended toward Realism and figurative depiction (a claim that is not altogether false), beginning in 1935 the museum established a close relationship with Arshile Gorky, whose early Surrealist-cum-abstract works made him one of the most celebrated artists of the early 20th century.

While one of Gorky's paintings had previously been selected by MoMA Director Alfred H. Barr, Jr. for a 1930 exhibition, and Gorky himself enjoyed a few solo shows in some smaller galleries, the artist remained largely unknown during the early 1930s. In 1935 two curators from the Whitney, Hermon More and Karl Free, chose three of Gorky's paintings to be exhibited at the museum's bstract Painting in America exhibition, and subsequently the artist's works appeared in nearly every Whitney Annual and Biennial until his death in 1948. Among those selected were Gorky's Organization (1936), chosen for the Third Biennial of Contemporary American Painting in 1936, and Painting (1936-37), one of the Whitney's very first purchases (for $650) after establishing its new annual $20,000 acquisitions fund in 1937. Gorky's career, both in life and posthumously, benefited greatly from his association with the Whitney.

Friends of the Whitney Museum of American Art
In 1942 Gertrude Whitney passed away. That same year, Gertrude's daughter, Flora Payne Whitney, assumed the role of museum president and chairman, a position she would hold until 1974, when the torch would pass to her daughter, Flora Miller Biddle. In 1948 the Whitney's founding director, Juliana Force, passed away as well. Both Gertrude Whitney and Force had been the driving force behind the museum's acquisitions committee and its annual and biennial exhibitions. Now with both women gone, the Whitney was obliged to reconsider just how it would maintain its tradition of acquiring cutting edge contemporary art coupled with a modest budget.

In 1956 a group of collectors, dealers and wealthy philanthropists formed the Friends of the Whitney Museum of American Art, led by Seymour H. Knox (of the soon-to-be expanded Albright-Knox Art Gallery in Buffalo, NY) and Nelson A. Rockefeller. The Friends set out to increase the Whitney's acquisitions budget and in turn to expand the museum's permanent collection; they acquired some of the most impressive works of art in the Whitney's permanent collection, including Franz Kline's Mahoning (1956), Willem de Kooning's Door to the River (1960) and David Smith's Lectern Sentinel (1961).

The Friends were also responsible for courting patrons and collectors to donate artworks to the museum. Notable examples include Howard and Jean Lipman, collectors who had amassed an impressive number of sculpture and in the late 1960s donated a number of works by Alexander Calder, Donald Judd, George Segal, Dan Flavin and Claes Oldenburg.

The Whitney Moves and becomes a Center of Education The Whitney Museum had relocated twice between 1954 and 1966, both times remaining in the Greenwich Village area. In 1966 the museum moved into its new permanent home, a modern and multi-tiered granite building designed by the Hungarian-American architect and furniture designer Marcel Breuer. The building, located on Madison Ave. in Manhattan's Upper East Side, is well known for its expansive facade that suggests a giant inverted staircase, growing by leaps as it rises from the street level.

Interestingly enough, the portion of the museum that receives the most natural light is its basement level, which houses the Whitney archives and research library, two other features for which the museum has gained wide acclaim.

In 1968 a 25-year-old student of art history and theory named Ron Clark founded the Whitney Independent Study program, or ISP. The ISP is directed by Clark to this day, and has become famous for its interdisciplinary approach to educating select students in the areas of critical theory, studio production, and curatorial work. Arguably, the ISP's most famous alum is the artist-filmmaker Julian Schnabel.

Expansion
The Whitney is currently working to expand its operational space, and in 2012 plans to open a 50,000-square-foot satellite gallery space on Gansevoort St., located in the northern end of Greenwich Village.

Legacy
Possibly the Whitney's greatest legacy lies in its Annual and Biennial exhibitions. While most museums, both big and small, have no firm schedule for acquiring contemporary art, by establishing regular exhibitions of new works, the Whitney confirmed that it would continually remain on the cutting edge. With this reputation, the museum has been able to amass one impressive collection after another, including the largest grouping of Alexander Calder works anywhere in the world, and a notable collection of Arshile Gorky works, most of which were acquired posthumously. Additionally, the Whitney Museum has not only set out to seek and acquire important contemporary art, but also to teach and nurture future contributors to the arts as well.


THIS PAGE IS OLD
The Art Story Foundation continues to improve the content on this website. This page was written over 4 years ago, when we didn't have the more stringent/detailed editorial process that we do now. Please stay tuned as we continue to update existing pages (and build new ones). Thank you for your patronage!
Works of Art from the Whitney Collection
Movements
Art Nouveau
Bauhaus
Dada
Pop Art