The Fourteenth Street School painters were influenced by the earlier Ashcan School, which, led by Robert Henri, emphasized realist painting at the turn of the century, rejecting both the academic art of the National Academy of Design and the influence of Impressionism. Henri worked and taught in Philadelphia where he became a mentor to John Sloan, George Luks, Everett Shinn, and William James Glackens, and, around the turn of the century, all of them relocated to New York City. In New York, Henri's student George Bellows became a leading painter of the group, giving the movement its name with his painting Disappointments of the Ash Can (1915). Influenced by earlier masters, including Frans Hals, Diego Velázquez, Francisco de Goya and the later Realists Édouard Manet and Edgar Degas, the movement applied classical methods to realistically portray the grittiness of American urban life. Distancing their work from the modernist "art for art's sake" mantra, Henri described their work as "art for life's sake." Teaching at the Art Students League in New York, Sloan and Henri taught and influenced the Fourteenth Street School painters. Growing up in upstate New York, Kenneth Hayes Miller moved to New York City as a young man where he studied at the Art Students League. His early works were influenced by Albert Pinkham Ryder, but by the early 1920s, influenced by Renaissance and Baroque masters, he turned to figurative treatments of women shoppers along Fourteenth Street, as seen in In Passing (1920). As art historian M. Sue Kendall wrote, "In their classical poses and formalized compositions, Miller's shoppers become ovoid and columnar forms in cloche hats and chokers." In 1911 he began teaching at the Art Students League, a position he held until 1951, where he influenced several generations of artists, including Edward Laning, Isabel Bishop, and Reginald Marsh, core members of the Fourteenth Street School.

Believing that the modern, leading European artists Matisse and Picasso had forfeited art's social function in favor of a style that emphasized artistic personality, Miller emphasized a more 'anonymous' approach based on classical rigor to depict contemporary life. At the Art Students League he primarily taught composition, with an emphasis on Renaissance principles, and life studies. In his own practice, he emphasized the figure, as seen in Shopper (1928), throughout his career, and his subject matter became a defining characteristic of the Fourteenth Street School, sometimes also dubbed the "Miller gang." Though Miller advocated for realism and a logical internal design as seen in the old master tradition, he also felt that that art should be contemporary and based upon what he called "plastic" and "significant" form. Gertrude Vanderbilt Whitney, the heiress and art patron, founded the Whitney Studio Club in 1918 and subsequently named Miller and his students as members. The art club became a hub for artists, who gathered there and developed longtime associations, and it organized traveling exhibitions. Art critic Forbes Richard said in 1927 that the Whitney Studio Club "had probably done more than any other single institution to bring to the notice of the public the creative younger artists." Often considered counter to the influence of Alfred Stieglitz's 291 gallery, which promoted avant-garde work, the club provided a vital outlet for Fourteenth Street School realism. The Whitney Studio Club continued until 1930, though in 1928, it launched the Whitney Studio Galleries, and in 1931 became the Whitney Museum of American Art, where Edward Laning's work was featured in its first major exhibition. The Fourteenth Street School was also promoted in The Arts, a magazine founded in 1919 by the artist and art patron Hamilton Easter Field. It espoused the progressive American values also promoted by Mrs. Whitney, who provided financial support to the magazine. Devoted "entirely to significant works of the present and past that are in tune with the grand tradition of all time," the magazine advocated a broad-minded approach, "for neither the radical nor the conservative...[but]...to stand with the American artist." In 1923, the magazine featured Reginald Marsh as an upcoming painter of "America's grand subject," and played a critical role in establishing the Fourteenth Street School. 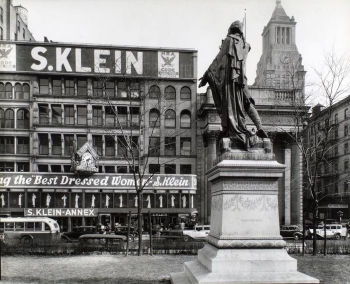 The area around Fourteenth Street became known in the 1920s as "the poor man's Fifth Avenue," for its department stores selling affordable fashions. Businessmen and local politicians launched a revitalization of the depressed neighborhood and promoted it as a rising mercantile center, reflecting American progressivism and rising middle class prosperity. By 1930, the neighborhood included a number of major banks, entertainment venues, the Consolidated Edison Company, and retail department stores, including Hearn's and Klein's, which attracted thousands of shoppers. Albert Halper, known for his novel Union Square (1933), described the contradictory nature of the dynamic neighborhood, writing, "In my estimation Union Square, while a facet of the American scene, is not typically American at all. A visitor from the South, the Middle-west or the Pacific coast, is struck by the foreignness of the section at the very first glance....But in its flavor, its pushing, unconscious brutality, its search for bargains even at the fracture of a limb, its busy shoppers on one side of the street and aimless, floating crowds on the other side, there is something American to the core." Halper also explained, "The noise was terrific, everything was bedlam....Everywhere you turned a vender shoved an object under your nose, yelling, screaming, urging you to buy."

The Fourteenth Street School artists had studios in the inexpensive neighborhood and primarily portrayed its inhabitants, though with different perspectives. While Miller and Bishop eschewed any depiction of its social and economic tensions, Soyer and Laning portrayed the rougher side of the neighborhood, particularly during the 1930s as the effects of the Great Depression took hold. Charles Reade, a novelist, first used the term "New Woman" in 1877, as he argued for equal treatment for women, and, subsequently the novelist Henry James popularized the term in Daisy Miller (1878) and Portrait of a Lady (1880-81), portraying female protagonists with economic and personal independence. Driven by cultural and political changes, the image of the New Woman went through several subsequent incarnations; after World War I, the New Woman morphed into the Gibson girl, a young modern woman who worked outside the home and often challenged middle class values, and in the 1920s, the New Woman informed the "flapper" who was known for youthful fashion and a jazz age lifestyle. Society underwent rapid changes, as many women entered the work force, and in the 1920s many young women worked in banks or at department stores, even while marriage was still considered the ideal. The Fourteenth Street School artists variously interpreted the New Woman; Isabel Bishop portrayed "the career girl" or "office girl," Miller depicted the middle-class shopper, and Reginald Marsh pioneered the "Marsh girl," a femme fatale. As art historian Ellen Wiley Todd wrote, "Through their works, [they] kept in play the multiplicity of debates about women and the contradictory experience and representation of 'new women' and a 'new womanhood' between the wars." Most of the Fourteenth Street School artists created easel-size paintings, but in the 1930s, Miller, Bishop, Marsh, and Laning joined the ranks of many artists who worked on projects sponsored by the Works Progress Administration to counteract the effects of the Great Depression and created a number of mural projects. Laning's The Story of the Recorded Word (1938-1942), a series of murals painted for the New York Public Library, became his most famous work, and he continued making murals into the 1980s. Also acclaimed were Reginald Marsh's sixteen murals, depicting harbor scenes and famous navigators, painted for the U.S Custom House in New York City between 1936 and 1937. The artists also worked throughout the country, as Bishop painted her mural Great Men Come from the Hills (1938) for a post office in New Lexington, Ohio, and Marsh painted Unloading the Mail (1936) for a federal building in Washington, D.C.

In addition to painting, Miller, Bishop, and Marsh emphasized etchings and print making throughout their careers. This trend was influenced by both the tradition of illustration that informed American realism, beginning with the Ashcan School, and by the classical etchings of the Old Masters. With works such as Noon Hour (1935), Bishop became known as a leading New York printmaker, and she continued making etchings into the 1960s when she adopted both the use of aquatint and a more abstracted treatment of the background as seen in her Nude (1961). Miller's etchings were often reproductions of his notable paintings, while Soyer's etchings in the 1930s depicting the unemployed and the poor of the Bowery were among the most acclaimed of the era.

In the late 1930s the Fourteenth Street School, along with other movements like American Regionalism that emphasized realistic treatments of American subjects, came under fire as being as too conservative and nationalistic, and by 1940 the school as a movement had come to an end. The artists pursued divergent paths and explored new subject matter while retaining an interest in realistic depictions. Marsh turned to illustrating for leading magazines, including Life and Esquire, and returned to teaching, where he was a noted influence on his student Roy Lichtenstein. At the same time while developing techniques that blurred the definition between painting and drawing, Bishop began painting nudes, which were much admired by Willem de Kooning.

With the rise of Abstract Expressionism and as the Fourteenth Street School artists were overlooked, some of the group launched counter initiatives on behalf of representational art. In 1953, Bishop cofounded Reality: a Journal of Artists' Opinions and invited Raphael Soyer and his brother Moses, Marsh, Edward Hopper, Guy Pène du Bois, Leon Kroll, Yasuo Kuniyoshi, Jack Levine, and Chaim Gross to join the meetings held in connection with the journal, dedicated "to the defense of any painter's right to paint any way he wants." In the 1960s, Soyer wrote his first memoir A Painter's Pilgrimage (1962), followed by his noted study Thomas Eakins (American, 1844-1916), and became the leading advocate for representational art in New York's literary and artistic circles.

The Fourteenth Street School's continued advocacy of representational art influenced the 1960s development of Contemporary Realism, spearheaded by Fairfield Porter who early in his career studied at the Art Students League. As artists like Alex Katz, Philip Pearlstein, Lois Dodd, Neil Welliver, and Jane Freilicher, turned to realist art, the Fourteenth Street School artists were rediscovered in the 1970s. The School of London, another representational movement led by Lucian Freud, David Hockney, and Francis Bacon in the 1970s, further established a new critical context that brought forward the work of the Fourteenth Street artists, and during this period three major studies of Isabel Bishop's work were published.