Max Beckmann was born and raised in Leipzig, Germany, the youngest of three children in an upper-middle-class family. His father, Carl Beckmann, was a grain merchant who passed away in 1894. His mother, Antoine Beckmann, relocated the family to Braunschweig, where Max lived with his mother and brother for the next several years. He attended a few private educational institutions, including a boarding school run by a Protestant minister from which he infamously ran away when he was ten.

Max showed an early interest in art, often disrupting class by making sketches and passing them among the students. His earliest self-portrait dates to around 1898 when he was just a teenager and demonstrates how dedicated Beckmann was to the visual arts at an early age. He was intent on pursuing a career in art and, despite his family members' protestations, applied to the Akademie der Bildenden Kunste (The Academy of Fine Arts) in Dresden in 1898, but failed to gain entrance.

Despite the initial impasse in Dresden, Beckmann entered the Grossherzoglich-Sachsische Kunstschule Weimar (Weimar-Saxon Grand Ducal Art Academy) in 1900. Beckmann studied primarily under Carl Frithjof Smith, a Norwegian realist painter who instilled in him a penchant for the authentic representation of reality. The academy granted him a diploma with honors in 1902, and the following year he left Weimar for his first of many trips to Paris. While there, he encountered the work of the Impressionists and Post-Impressionists firsthand. In particular, the works of Paul Cézanne left a deep impression on him.

Beckmann returned to Germany in 1904 and moved to Berlin, where he lived until the beginning of World War I. Paintings from this early period, such as Young Men by the Sea (1905), demonstrate the influence of the Paris visit upon his work, as evidenced by the light palette and careful arrangement of figures within the picture plane. Beckmann received an award from the German Artists' League for Young Men by the Sea that provided him with a six-month stay at the Villa Romana in Florence. While abroad, Beckmann also developed an admiration for the philosophy of Friedrich Nietzsche and the dramatic styles of Vincent van Gogh and Edvard Munch, and his works shifted to an Expressionistic style as seen in Small Death Scene (1906). In 1906, he first exhibited with the Berlin Secession - a group founded by young, modern artists to counter the more conservative state-run art establishment.

In the fall of 1906, Beckmann married Minna Tube, a fellow artist whom he courted while at the Academy in Weimar. That same year, Beckmann also built a professional relationship with Paul Cassirer, a leading dealer of modern art in Berlin and a Secession board member. Cassirer held a large solo exhibition of Beckmann's work and also published the first monograph about him in 1913. Throughout this period, his work was dominated by large narrative scenes. By painting the external world as he viewed it, Beckmann consciously positioned himself in opposition to the abstraction advocated by Der Blaue Reiter artists like Franz Marc.

Beckmann volunteered for the army at the start of World War I in 1914. Trained as a medical orderly, he worked in various hospitals until he was discharged in 1915 after suffering a nervous breakdown on the Belgian front. He moved to Frankfurt and resumed his artistic pursuits. His experiences of death and violence during the war had a profound impact upon his art, as seen in the awkward, twisted figures of Adam and Eve (1917) - one of the first paintings completed during his recuperation after service. The heavy, elongated lines and claustrophobic space that characterized Beckmann's new style received tepid reviews from critics. 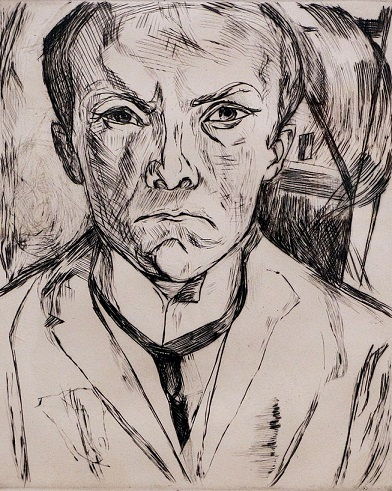 In August of 1918, Beckmann drafted a manifesto of sorts, in which he clarified his ideas regarding the contemporaneous tumult and indicated his intention to "be part of all the misery that is coming." He frequently used his art to engage with political, social, and economic issues plaguing post-war Germany, particularly in the context of the Neue Sachlichkeit (New Objectivity) movement, which critically depicted the instability of Germany after World War I. Beckmann was widely recognized as one of the leaders of the movement and featured prominently in Gustav Hartlaub's 1925 exhibition survey at the Kunsthalle Mannheim.

Beckmann and Tube lived separately after the war and eventually divorced amicably in 1925. He married Mathilde "Quappi" von Kaulbach, a young opera singer, the same year and accepted a teaching position at the Stadel Art School in Frankfurt. Throughout the 1920s, Beckmann's work featured regularly in exhibitions around Germany and Europe, including a large retrospective at the Stadtische Kunsthalle in Mannheim during 1928. By this time, his style fluently incorporated elements from his earlier painting such as Adam and Eve (1917), but in more vivid, expressive colors. Neumann sponsored his first exhibition in the United States in 1926, and Alfred Barr, the first director of the Museum of Modern Art, included six of Beckmann's paintings in a group show in New York in 1931.

After Hitler's appointment as chancellor of Germany in 1933, Beckmann received notice of his dismissal from the Stadel School, and his paintings were removed from display in German museums. He left Frankfurt and returned to Berlin that same year. In the midst of an increasingly hostile atmosphere toward modern art within Germany, Beckmann created Departure (1937), the first of his famed triptychs. Beckmann and his wife, Quappi, moved to Amsterdam that year, the same day that the Nazi-sponsored Entartete Kunst (Degenerate Art) exhibit denigrating modern art opened in Munich. Beckmann never returned to Germany, and remained in exile for the rest of his life.

Beckmann lived in Amsterdam throughout the war and remained incredibly productive despite his displacement, executing numerous paintings, prints, and drawings. He received an offer for a teaching position at the School of Fine Arts at Washington University in St. Louis in August of 1947. Crossing the Atlantic with Quappi, Beckmann settled in St. Louis later that year. During the summers, he taught in Oakland, California, and Boulder, Colorado, and enjoyed the opportunity to tour the American countryside. He left St. Louis in 1949, when he was offered a position on the faculty of the Brooklyn Museum Art School. He and Quappi moved to New York City that fall. In December of 1950, Beckmann died of a heart attack while walking to the Metropolitan Museum of Art to see his Self-Portrait in Blue Jacket (1950) on display, only one day after he finished his final painting, Argonauts (1950).

The Legacy of Max Beckmann

Beckmann's extraordinary artistic development throughout the two World Wars left an enduring legacy. As a teacher, his stress upon the importance of personal narrative was an abiding lesson for his students, both in America and Europe. Outside of his teaching practice, Beckmann's close proximity to many other artists throughout his career allowed for the exchange of influences among colleagues. Some of the earlier artists who were affected by Beckmann's oeuvre were his compatriots among the Neue Sachlichkeit movement, like George Grosz and Otto Dix. These artists shared their ideas regarding politics and art, each having a lasting impact on the others. As a teacher of young artists in America, Beckmann had a lasting and far-reaching impact. The Color Field painter Ellsworth Kelly was one of Beckmann's students and, despite stylistic differences, acknowledged an artistic debt to his mentor in a catalogue essay decades later. Although Beckmann replaced Philip Guston as an art teacher at Washington University, Guston learned much from the German expatriate's sensuous application of paint and stark narrative style.

The prominence of Beckmann's works within American museum collections further extended his impact on subsequent generations of artists. Portraitists working during the late-20th century, like Alice Neel, clearly encountered his work and were stylistically indebted to Beckmann's unrelenting representations of sitters, particularly in respect to his use of hard outlines, his application of vibrant colors, and his frank portrayals of his subjects. Additionally, socially conscious artists like Leon Golub and William Kentridge also owe a debt to Beckmann's expressive technique as well as his interest in critically portraying the reality of his time in paint.