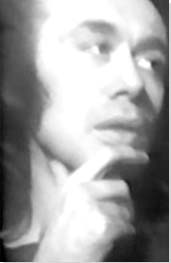 Vito Hannibal Acconci was born in Bronx, New York, the only son to Italian immigrant parents. He was named after his grandfather, who was ill at the time but later recovered. Growing up, he resented his Italian heritage: "As a child I hated my Italian background; I wanted to be an American. Later at high school dances, for example - I hated introducing myself; it was as if no one could hear me I had to spell things out: 'No, not Peter - V-I-T-O.'"

Raised Roman Catholic, he attended Catholic schools from kindergarten to his graduate studies, explaining that "there wasn't a woman in my classroom between kindergarten and graduate school." As an adult, Acconci abandoned the Catholic faith, ironically citing his Catholic education as one of the main reasons for disassociating himself from religion.

Still, the artist recalled his upbringing as happy: his interest in the arts, especially writing, was encouraged and cultivated by his parents. His father, who "lived in a world of puns" inspired his early love of language, teaching him the playfulness and flexibility of words. Unfortunately, Acconci's father died in 1962, unable to see his son's artistic achievements.

Acconci earned his BA with a major in literature from Holy Cross College in Worcester, Massachusetts in 1962 after which he completed his MFA in writing at the University of Iowa. Upon completing his studies in 1964, Acconci returned to New York City to pursue a career as a poet. There, he first encountered the works of Jasper Johns that left a profound impact on him. Influenced by Johns, Acconci's poetry focused on the synthesis between language and the artistic use of space.

From 1962 to 1968, Acconci was in a short-lived marriage with artist Rosemary Mayer. Through Rosemary, he befriended her younger sister, poet Bernadette Mayer. During the second half of the 1960s, he and Bernadette published the groundbreaking mimeographed magazine 0 - 9, named after a series of works by Johns. Rosemary was also involved in the project, and occasionally contributed to its production. Even though the avant-garde publication existed for three years and had only six issues, it brought together leading figures of experimental poetry and conceptual art.

In 1969, Acconci began his transition from poetry to visual arts. His earliest works were photographs, which recorded his different actions, such as jumping, bending, or throwing. These laid the groundwork for Acconci's performance pieces, which he sometimes combined with video and film. The performances usually employed his body as a key element, and at times tested the artist's physical and mental limits - as well as the viewer's comfort level. In Trademark (1970) he bit his body all over, in Claim (1971) he blindfolded and barricaded himself in a small space and, with a crowbar and metal pipes, violently defended it from intruders, and, most famously, in Seedbed (1972) he masturbated while hidden under the gallery floor. Art historian Frazer Ward pointed out that these artistic experiments all share a common thread, which will continue to occupy the artist throughout his career: "Acconci characteristically shuttled between public and private realms so as to disallow any clear distinction between them." In most of these early performances, the private realm was expressed through corporeal and sexual activities, which expressed both masochistic and sadistic tendencies and turned the performances into provocations that elicited the audience's affective reactions. Some of these body works were done in collaboration with Kathy Dillon, his partner at the time. The couple lived together for five years, and their collaborations usually explored the power dynamics of their relationship. In some instances, Acconci wanted to assert domination and control over Kathy. His tactics varied from physical force to sexual innuendo and emotional manipulation. The performances were personal but also planned, making it hard to decipher between art and life, and describe the genuine nature of their relationship. Once they parted ways, Acconci once again channeled his emotions through performance: in Line-Up (1973) he played various roles in front of the audience in order to process the end of his relationship with Kathy.

The development of Performance Art in the 1960s, and Acconci's artistic practice specifically, is linked closely to Minimalism and Conceptual Art. With the cultural climate of Feminism and increasing artistic awareness of gender and body politics, the artist was also conscious of his role as a male performer: "Performance in the early seventies was inherently feminist art. I, as a male doing performance, was probably colonizing it." The influence of Feminist Art and theory may underlie his choice of subject and performance parameters, which grappled with questions of sexuality, power, and gender relations. While the artist laid bare his sometimes vulnerable and abjected self, some of these performances were also criticized for their sexist elements and overtones that, especially from today's vantage point, lacked nuance in dealing with personal boundaries and trauma awareness.

In 1974, Acconci stopped performing, and between 1974 and 1979, he created installations and sculptures that would often incorporate video and audio. This shift signified the artist's desire to take the focus off himself and concentrate on the viewer, and their interaction with the artwork: "Whereas in the beginning I could see my stuff as 'person meets person', gradually I came to realize it was 'art viewer meets art star.' I had always been against this notion of cult, or art as a religion, or art as sacred object. My shift, then, was from a kind of psychological self to a sociological self."

By 1980, he completely removed his presence from his work, and began creating installations and sculptural pieces that he called 'self-erecting architecture.' Throughout the 1980s, Acconci explored the idea of the home, and the house became a frequent motif in his work. For Acconci, the house is a space filled with contradictions: it is associated with security, protection, and sanctuary, but it can also be seen as a restrictive space that is controlled by a repressive paternal authority.

In 1988, Linda Sherer curated the exhibition 'Public Places' at the Museum of Modern Art, New York, which focused on Acconci's sculptures and public art projects. The exhibition represented a turning point for Acconci's career as a designer of public projects: "Before that show, nobody asked me to propose projects for public places." Seizing momentum, that same year, he opened the collaborative enterprise Acconci Studio, signaling his transition from art to architecture and design. The idea behind the studio was to bring in people with expertise that would help him realize more ambitious architectural projects. Some of his first collaborators at the studio were John Taiguri and Robert Price, whom he met in 1979 after they completed graduate school in architecture at Columbia University. Taiguri and Price were already close to Acconci and had helped him realize some of his early sculptures. From the outset, Acconci wanted the studio to function as a collaborative effort: "they didn't simply carry out my ideas; rather talking with them reshaped and reformed my idea. Now I was thinking because of them and through them."

By establishing the studio, Acconci could focus on his primary goal, creating public projects, that would engage broad audiences and would reconnect art with life. Their commissions varied from commercial entities to institutions and public spaces. By 2000, Acconci Studio expanded to a total of eight collaborators including Acconci himself. Around the same time, he met his second wife Maria, over forty years his junior, while giving a commencement speech at Pratt Institute. The couple got married, and later worked together at Acconci Studio. During the 2000s, the studio realized one of their most successful projects, the human-made island Murinsel (2003) in Graz, Austria. They also presented ambitious project proposals that remained unrealized. One example was a proposal for a new World Trade Center (2002) that presented a futuristic tower full of holes.

In 2016, in celebration of their 40th anniversary, MoMA PS1 organized the exhibition VITO ACCONCI: WHERE WE ARE NOW (WHO ARE WE ANYWAY?), a survey of Acconci's early career. A year later, Acconci passed away at the age of 77. He is survived by his wife Maria Acconci.

The Legacy of Vito Acconci

As a pioneer of Performance and Video Art, Acconci influenced a generation of younger artists, such as Tania Bruguera, Mike Kelley, Laurie Anderson, and Matthew Barney.

With Acconci's work as a starting point, in her seminal essay "Video: The Aesthetics of Narcissism" (1976), art critic Rosalind Krauss argued that the aesthetics of narcissism emerge with the rise of the medium of video. Analyzing the work Centers (1971), in which Acconci filmed himself pointing to the center of a television monitor for the duration of 20-minutes, Krauss argued: "A line of sight that begins at Acconci's plane of vision and ends at the eyes of his projected double. In that image of self-regard is configured a narcissism so endemic to works of video that I find myself wanting to generalize it as the condition of the entire genre." In today's context, her critique can be applied much more broadly to our entire online communication and media structure. Acconci's artistic experiments from the late 1960s and early 1970s, which documented the mundane and challenged the boundaries of the private and public realms, foresaw the technological potential that changed the way we communicate and consume content in the era of social media, with all of its entangled affective relations and manipulations. Hence, his early works still maintain the potency and the social relevance they had at the time of their conception. Their tactics, sometimes heavy-handed and sexual, remain provocative.

The importance - and notoriety - of these early works overshadowed the artist's later accomplishments and collaborative work at Acconci Studio. While this proved to be a source of some frustration for the artist, it has not impeded him from building a successful career as an architect and designer. Today, Acconci Studio continues its work as a design collective, honoring the work and vision of their founder.